Are cobots the answer to technological unemployment?

Over the past several years, the focus of the media has been on the elimination of jobs and entire sectors of work when relating to robotics, artificial intelligence, and general automation processes. Well known publicised studies, reports, and articles coming from big players such as Oxford University Press and McKinsey, have detailed several of the sectors, amounts, and estimated dates at which these innovations will be relieving employees of their means of putting bread on the table (ie. Half of most human tasks around the world can be automated, accounting for $16 Trillion in wages). These sensational headlines may turn out to be as precise as they claim in the years to come, however, they obfuscate other issues and trends that are occurring today.

One in particular is the implementation of collaborative robotics (cobots) which, rather than eliminating the need for human labour, positively changes or modifies the form of it in industrial settings.

With globalisation, the West saw many manufacturing industries re-located to nations with inexpensive workforces (4.5 million US jobs to China alone since 2001). This ‘offshoring’ continues today, however with the current rapid changes in consumer preferences, manufacturers require process flexibility, which cannot be achieved with distant manufacturing.

Collaborative Robots allow a solution for the two issues presented. Due to their ability to work alongside human employees and their rapid and easy re-programming, cobots enable the modern needs of flexibility in a manufacturing setting. Additionally, the robot is able to do the repetitive, and potentially hazardous tasks which enables work tasks to shift/change, rather than eliminating an entire position (+85% efficiency of employees with cobot implementation). As robots are still ineffective at distinguishing quality standards compared to the human eye, workers are being retrained to do more higher level cognitive tasks such as quality assurance along with managerial tasks. Cobots thus contribute to increased worker satisfaction and ‘reshoring’ of jobs and enterprises. However, in 2016, collaborative robots only represented 3 percent of industrial robots sold, but are expected to represent 34% by 2025.

Fieldlabs across the EU demonstrate real workplace scenarios and the benefit of cobots to industrial manufacturing organisations. By seeing the tangible effects of using cobots, businesses can understand how to remain flexible and competitive without relocating to other countries. A network of fieldlabs can enable organisations from across the EU to understand the benefits and begin implementation. Bax & Company is working with industrial leaders across North West Europe to deliver one of the first Collaborative Robot Field Lab Networks through the COTEMACO project.

Escaping the valley of death in the industrial worldEnergy efficiency, General, Smart Industry 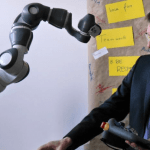