Presided over by the government of Fiji, the UN Climate Summit and Twenty-third Conference of the Parties (COP 23) was held in Bonn, Germany, this year.

Bax & Company’s managing partner and director of the Climate & Environment cluster, Sebastiaan van Herk, travelled to Bonn, with a team of consultants, to launch the Global Centre of Excellence on Climate Adaptation (GCECA).

Two years ago, at COP 21, parties initiated the historic Paris Agreement, which laid the foundation for placing equal emphasis on both Climate Mitigation and Adaptation.

Climate adaptation, it would seem, is something in high demand as countries not only try to reduce their emissions, but face disappearing coastlines, storm battered cities and drought ridden farmland.

This was particularly pertinent as COP 23 was presided over by Fiji, a small island developing state, already confronted by rising sea levels and extreme weather.

During the two week climate summit, there were many climate adaptation focused side events. These included the launch of the UN Environment’s Adaptation Gap Report, supported by the Global Centre of Excellence on Climate Adaptation.

In addition, Bax & Company supported the side event, What is Excellence in Climate Adaptation, where GCECA operations director, Christiaan Wallet, highlighted how much work there is still to be done on climate adaptation, “We are grateful that the Paris Agreement has put climate adaptation on a par with mitigation but there is a long way to go.”

It was largely seen that COP is beginning to change for the better. Not only did climate adaptation receive more attention than in previous years, but a wider variety of stakeholder groups – including NGOs, businesses and research institutes – had the opportunity to contribute in a more meaningful way. Saleemul Huq, noted this by contrasting the negotiator’s venue (called the Bula Zone), “a newly built fancy conference centre, which was mostly underground with very little natural light,” with the exhibition areas (or Bonn Zone), which were “constantly buzzing with action, discussions, singing and even dancing on occasion. The energy level was orders of magnitude higher than in the dull and boring negotiators’ space.”

By putting climate adaptation central stage, at COP 23, we were shown that it’s a difficult concept to measure and promote; we lack metrics, signposting excellence and guidance in capacity building and policy development.

The Global Centre of Excellence on Climate Adaptation will address these issues by forming thematic groups, based on the global demands and specific stakeholder needs for climate adaptation efforts. The Centre will accelerate climate adaptation by recognizing, building and promoting excellence among all relevant stakeholder groups around the world.

Dr van Herk and the Bax & Company Climate Adaptation Team were hired by GCECA founding partner, the Government of the Netherlands, to create real world impact by developing the Centre’s strategy, mobilising global resources and managing the partnerships.

One of the significant roles of Bax & Company was the bringing together of the many international partners; a key component to the success of the Centre. Bax & Company supported the conversations with the global consortium to develop strong partnerships with organisations, such as The World Bank, EBRD, WWF and the GEF, and countries such as the Kingdom of the Netherlands, Japan and the Philippines.

Bax & Company were able to leverage their knowledge of climate adaptation initiatives (from projects such as BEGIN, Building with Nature, FAIR and Carbon Connects) to give strategic advice and drive the mission of the Centre. In climate adaptation, this means reducing vulnerability and promoting the development of countries, communities and creating new business opportunities that face these global challenges.

Our mission is to create value from Science and Technology. In climate adaptation, the demand for real world impact becomes achingly clear when looking at islands, such as Fiji; developing nations, like Bangladesh; companies, such as Unilever; and cities, such as Jakarta or even Rotterdam. They need to build resilience, reduce risk and climate-proof their communities. 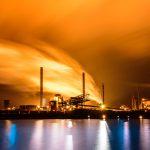 Escaping the valley of death in the industrial worldEnergy efficiency, General, Smart Industry