Protecting our critical infrastructure from flood damage: A case study in Bangkok

Critical infrastructure is a combination of systems and technologies that are essential to our health, safety, security and economic well-being; for example, electricity production, water supply, telecommunication and security services. If any are disrupted or damaged, this could lead to further detrimental consequences. Damage to critical urban infrastructure assets, during flooding in particular, can result in significant secondary consequences, which can be just as serious as the direct consequences. For example, the loss of power supply can impede the health service of an entire urban community.

It is crucial to have an understanding of these cascading effects and interlinkages between the organisations and systems involved in providing these essential services.

There is, however, a lack of insight into the vulnerability of critical infrastructure assets, what the severity of flood impacts could be, and what kinds of protective measures would be feasible and effective.

Eight researchers*, including Bax & Company partner Dr. Sebastiaan Van Herk, facilitated capacity building and a study in Bangkok, Thailand, to trial an approach for decision makers to rate their critical infrastructure at risk of flooding, and develop feasible measures to minimise flood damage to these facilities. The work was funded by NUFFIC, in collaboration with the National Housing Authority of Thailand.

The researchers held capacity building workshops with 30 professionals of the National Housing Authority of Thailand, training them so they could solve their own flood impacts. 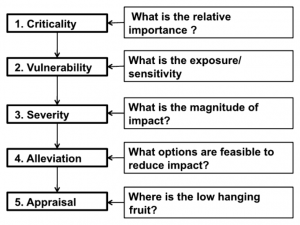 During these workshops, participants tested the ‘Quick scan methodology’; a rapid screening procedure to provide guidance on identifying, rating and protecting existing critical infrastructure, from the effects of flooding.

The Quick scan methodology is comprised of 5 steps (see image): first, to identify and analyse critical infrastructure assets and rank their criticality; second, to define the exposure and sensitivity of the assets; third, to assess the severity of the failure of such assets; fourth, to identify solutions to alleviate impacts; and finally, fifth, to identify the actions that can be undertaken at (relatively) low cost and with high impact, to further protect the urban critical infrastructure.

They focused on three neighbourhoods badly affected by the 2011 floods.

They also realised that the three communities were flooded for up to two months, with flood depths of up to 80 cm (and some locations even more than 100 cm). Furthermore, most secondary roads, local markets and shopping centres were closed for up to two months. Garbage trucks were no longer able to collect rubbish from some areas, and in many homes, the toilets were not functioning due to inundation, leaving residents with no choice but to use open space. 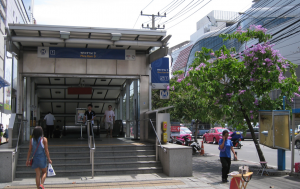 Fundamentally, the methodology helped to identify actions to alleviate the impact of floods: both through structural engineering and temporary measures. Structural engineering interventions included the installation of concrete walls, extra pumping capacity and the elevation of the road infrastructure. Temporary measures included sandbags, elevated temporary walkways and simple technology, such as elevated, flood-proof toilets and water tanks, which have a significant effect on livelihoods but can be implemented within a short period of time at relatively low cost.

Bax & Company is experienced in capacity building at an international level. Currently, we are facilitating the formation of thematic groups, for The Global Centre of Excellence on Climate Adaptation, based on the global demands and specific stakeholder needs for climate adaptation efforts. Similarly, we are delivering novel City2City learning workshops to stimulate peer learning in the Interreg North Sea Region project BEGIN (Blue Green Infrastructure through Social Innovation.)

We are confident in the positive impacts of learning together and sharing knowledge and expertise, across Europe and beyond.

If you are interested in finding out more about capacity building or assessing your city’s critical infrastructure, contact us 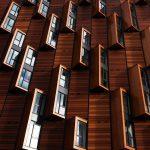 How will the cities of the future thrive?Climate adaptation, Energy efficiency, Future mobility, Smart Cities 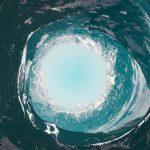 Water: an opportunity and a challengeClimate adaptation